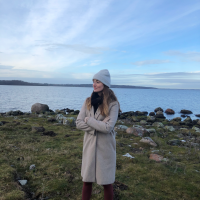 Kristen Hilkert tells stories that bridge the space between people. Since she was a child, she’d close her eyes and imagine what it was like to see through someone else’s. Today she does it for a living.

She is a Los Angeles based Director/Writer/Editor, a filmmaker, who has created award-winning short films and story-driven branded content full of thought-provoking worlds and moving performances. In 2017, she directed, co-wrote, and edited IN/FINITE, a short film and proof-of-concept which screened at 7+ film festivals before gaining distribution. It has since screened in independent theaters in Boston + Los Angeles, aired on DirectTV in its original format, and is available on AmazonVOD as part of the short film anthology A.I. Tales. It will soon be repackaged in the drama/sci-fi collection “5 Galaxies”. Currently she is developing a historical/musical/drama series, a drama/sci-fi series for streaming, and a dramatic short.

Kristen has also directed + edited commercials and content for WhoWhatWear, Origins, Macy's, Byrdie, Chandon, Laura Mercier, Tacori, SEE Eyewear, MyDomaine, SONY Music + many more. She co-wrote, produced and acted in the short films, THE WAHLBERG EFFECT and FRANK'S OUT BACK, and starred in the McWilliam Brothers' fantastic comedy-short titled HOW TO KILL YOUR CLONE, which screened at 30+ film festivals.