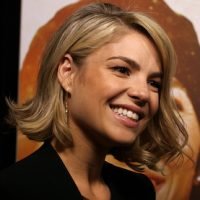 Katie Bender Wynn is an Australian former professional athlete and documentary filmmaker based in LA.

Currently, Katie is directing a 6 part docu-series for Disney Plus. She is also in pre-production on a feature documentary she will direct and produce alongside Serena Williams and Boardwalk Pictures.

Katie was a story producer on the NETFLIX docu-series HOME GAME [2020] about unique and dangerous traditional sports from around the world, and she story produced a SHOWTIME pilot about NBA champion Draymond Green [2019].

Her directorial debut was with the feature documentary THE WILL TO FLY [2016], profiling Olympic champion aerial skier Lydia Lassila. The film was quoted “The Most Inspirational Movie Of The Year” by Huff Post Australia. THE WILL TO FLY premiered in North America at the 2016 Whistler Film Festival in British Columbia. Here Katie was nominated for ‘Best Female-Directed Documentary Award’ from the Alliance of Women Film Journalists, and the film received ‘Best World Documentary Award’. The film had a successful Australian theatrical release and was sold to VOD and television networks across the globe, including National Geographic.