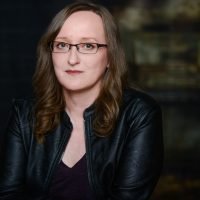 KATARZYNA KOCHANY (DGC) often directs work that touches on themes of ordinary people being caught in-between: between cultures, between loyalties, between tough choices.

She has experience directing projects with VFX and stunts.

She directed second unit on the TV series Good Witch (Hallmark/Netflix). Katarzyna's directing work has played on CBC (which bought 3 of her films), Amazon Prime Video, Argo, Sofy TV and The BeBop Channel, and earned 60 awards and 250 official selections at festivals, including Oscar-qualifying Durban Film Festival and Indy Shorts presented by Heartland Film.

She directed all episodes the female-led genre show ZAHARA, which was featured in FORBES, won the IPF Pitch Pit, was nominated for Best Digital Series at BITS, best low budget series at T.O. Webfest 2020, is on Amazon Prime Video USA, and premiered on Super Channel in Canada.

She directed 2nd unit, guest-directed a scene for main unit on The Marijuana Conspiracy, a fiction film based on a true story in 1972, about a disturbing human experiment on a group of young women. The film was picked up by Samuel Goldwyn Films and released on Hulu.