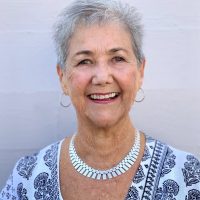 Judy Chaikin is a graduate of AFI's Directing Workshop for Women and is best known for writing, producing and directing the Emmy nominated PBS documentary, Legacy of the Hollywood Blacklist. Her short romantic-comedy, Cotillion ‘65, appeared in over 30 film festivals winning Best Short, Best Comedy, Best Director and Audience Choice Awards.

Judy performed in and directed improve theater working with groups such as the Committee Workshop, The Synergy Trust and The Groundlings. She directed the comedy pilot, On The Television, for Nickelodeon and the reality pilot American Families for Fox TV. Her feature length comedy screenplay, Ai! Chilito, recently won first place at the Broad Comedy Screenplay Competition and in 2021 her short screenplay, The Audition was produced by Wildflowers Films.

Judy was a Supervising Producer and Director on the ABC series, FBI: The Untold Stories, Co-Producer of the CBS Movie Of The Week, Stolen Innocence, Writer/Director of the bi-lingual PBS documentary, Los Pastores and won the Blue Ribbon at the American Educational Film and TV Festival for the docu-drama, Sojourner Truth:Ain't I A Woman, featuring Julie Harris.

Judy’s current film, The Girls In The Band, won six Best Documentary Awards, was a NY Times Critic Pick, has a 100% Critics Rating on Rotten Tomatoes and is currently showing on PBS both nationally and internationally.