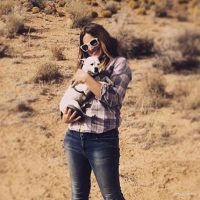 Jocelyn Jacobs is a writer and director. Born in California and raised in Arizona, Jocelyn lived in Brooklyn for 13 years before recently relocating to Los Angeles. Her projects are concerned with creating coherent and complex female subjects and her themes revolve around the intersections of class, gender, sexuality and power. MONA, a short narrative film about a fledgling lesbian, screened at the Maryland Film Festival, Newfest, and Inside Out: Toronto's LGBT Film Festival. Jocelyn holds a BA from Oberlin College and an MFA from the University of California, San Diego. Her work has been shown in New York, Los Angeles, Chicago, Pittsburgh, San Diego, Tijuana and Toronto. She has also worked extensively as a script supervisor on commercials, shorts and feature films. She is currently working on two feature scripts: one about an obscure lesbian sword fighter set in 17th Century France, and the other about coming out in Pittsburgh, PA in the early oughts.