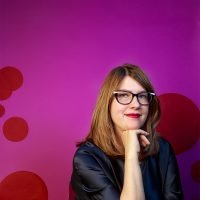 Writer/Director/Producer Heather Lenz is an award-winning filmmaker who is particularly drawn to telling the stories of trailblazers, underdogs, and people who have not walked the beaten path. Lenz is best known for KUSAMA-INFINITY, a feature length documentary about Yayoi Kusama, a Japanese artist who overcame sexism, racism, and mental illness on her path to becoming the top selling living female artist in the world. (“Fascinating and Inspiring.” The LA Times.) KUSAMA-INFINITY premiered at the Sundance Film Festival and received international distribution. Lenz was a 2018 Critics’ Choice Award nominee for best first-time director for her work on KUSAMA-INFINITY. In 2019 she was awarded The Women’s International Film and Television Showcase Foundation International Visionary Award in Documentary Film.

Lenz earned her MFA at the University of Southern California in Film and Television Production. The first documentary short film that Lenz directed, Back to Back, was nominated for a Student Academy Award and screened in film festivals world-wide. Some of her key interests currently include: art/design, sustainability, and strong female characters. She created Lenz Filmz to produce inspiring non-fiction content. Her strengths include directing and development.