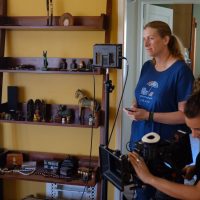 Cris Graves is an award-winning filmmaker who has worked across platforms from film to television to online content.

As a documentarian, she has worked across the globe filming in some of the World’s harshest and most remote areas and always brings home the most compelling story. You’ve seen her work on The Amazing Race, Whale Wars, Deadliest Catch, Weed Country and Hunted.

She loves telling a good story and she is currently working on a feature film script she hopes to direct in the near future... ask her about it!