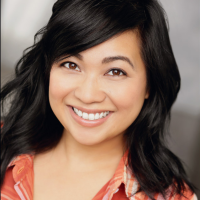 Giovannie Espiritu was nominated alongside Academy Award Nominees Alfre Woodard and Amy Irving for Best Supporting Actress at MethodFest for the feature film Fiona’s Script. She can be seen in the horror/thriller, “D-Railed” with Lance Henriksen and as the lead in the Amazon series, “Dyke Central,” which was critically acclaimed as a top LGBTQ series to watch. She just finished filming, “There Will Always Be Christmas,” alongside Eileen Davidson.

As a filmmaker, she was featured in Elizabeth Banks’ WhoHaHa Media for her parody song, “An Introvert’s World,” and her storytelling has been featured in Ms. Magazine. A three-time Outfest Fusion Filmmaker, she was awarded an Honorable Mention for her short film, “Ultra-Feminist.” Her film, "Ally 3000," received an Honorable Mention at the LatinX21 Film Festival and a Best Screenplay award at the Culture and Diversity Film festival which praised ALLY 3000 as a “smart, inventive comedy.” It was also shown at the California Women's Film Fest as an intro to the NAACP award-nominated documentary Pushout.

She coaches kids/teens online nationwide through HollywoodActorsWorkshop.com and was named as one of the top 40 Audition Coaches in LA. In her spare time, she advocates for Domestic Violence Awareness/Prevention and LGBTQ equality and was awarded a Certificate of Recognition from the Senate for her community service.