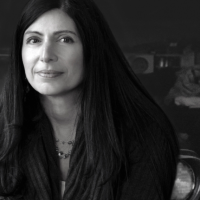 Christina, a writer-director and a first-generation Greek-American born in the fabled Asbury Park, New Jersey, explores a mythic Americana and its fractured dreamscapes in each project she creates.

Her 2017 short film TONIGHT AND EVERY NIGHT is based on a true story, and was a festival favorite. A feature film adapted from the short is presently in pre-production. Additionally, Christina directed and produced Demon on Wheels, a documentary feature about an older “reborn to be wild” hot rodder, his woman and the 1968 resto-Mod Mustang that comes between them. The film debuted in selected theatres and on streaming video in the summer of 2015. Her first doc feature, the award-winning Greetings from Asbury Park, is a personal look at how eminent domain affects a family and a small town, premiered on PBS in May 2009. It features the music of Bruce Springsteen who gifted the song “Tunnel of Love” to the film.

In addition to directing documentary shorts, brand films and commercials, she is the co-writer and co-creator of a 13-part television series, a supernatural drama entitled The Schaduwen, about a shapeshifting beast who returns to her ancestral home seeking justice for crimes against women.