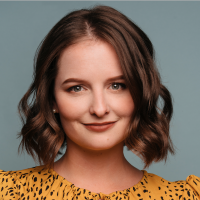 April Moreau is a comedic director and writer specializing in female-driven narratives. Her type-A personality strongly informs her style of storytelling, which is quick, precise, and focused. A survivor of 13 years of Catholic school, she loves creating work that is irreverent, particularly when discussing the female experience.

April was born and raised in Cape Coral, Florida and later attended the University of Michigan, where she earned a BFA in Acting. She continued her education in Los Angeles, studying TV Writing for half-hour comedy at UCLA Extension and improv and sketch at Groundlings and UCB.

Her directing career began in the sketch comedy world, with her work being featured on the homepage of Funny or Die and Elizabeth Banks’ WhoHaha. In 2018, her comedic short, BITCHES BY THE SEA, screened in Paul Feig’s shorts contest at HBO’s Women in Comedy Festival. Her most recent film, RIDE IN PROGRESS, is set to premiere in the 2020 festival circuit. She is a proud member of the AFI Directing Workshop for Women, Class of 2021.

April's hobbies include hiking, reading, and trying and failing at online dating. When she's not on set, she can be found at happy hour.