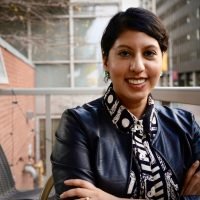 Amen Jafri is a self-taught documentary filmmaker and producer. A late bloomer, she kickstarted her film career as an intern on the feature thriller Penthouse North with Michael Keaton and Michelle Monaghan and since then has also worked at the Cable Public Affairs Channel, the Aboriginal Peoples Television Network and Alibi Content. She has mentored other emerging filmmakers through the DOC Institute and Arts Network Ottawa. Her work has been shortlisted for the TVO Short Doc Contest and screened for TVO, CBC, the American Documentary Film Festival, Brooklyn Web Fest, The Pilot Light TV Festival and more. In 2018, she directed the Wingd/Bell Media production, Creatorland and was named a fellow for the Hot Docs Doc Accelerator Lab, as well as an IAWTV Award Winner and a participant in WIFT's IDM Fund Futures Program. She is currently starting production on her next documentary, She Said "I Do"...to Herself, which was recently awarded funding through the City of Ottawa.