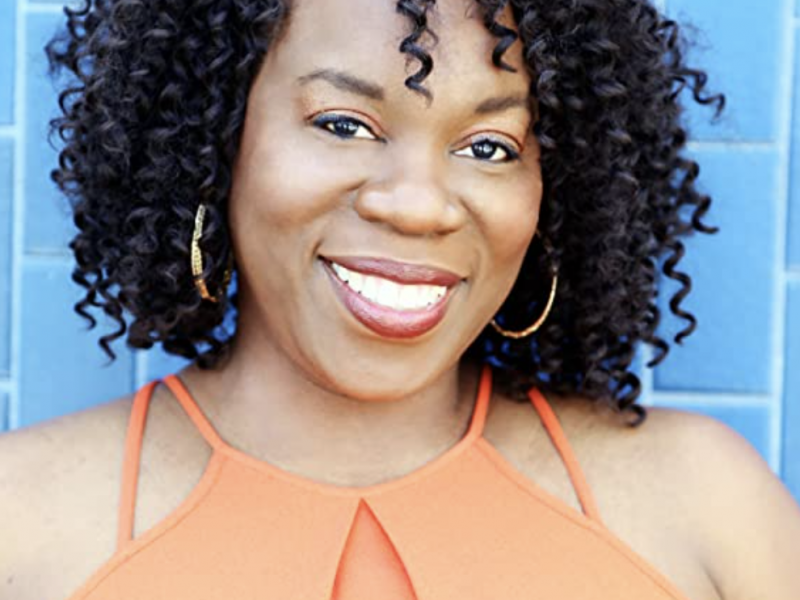 AWD Member Morenike Joela Evans is a filmmaker on the rise! As a director, writer, and creative EP, Morenike first came to prominence producing entertainment and cultural lifestyle programming for networks such as MTV News, BET, NBC, and OWN. After transitioning to scripted programming with several award-winning web series, the past two years have seen her incredible rise in the multi-cam space. She has directed episodes of hit Disney TV shows Raven’s Home, Coop & Cami Ask The World and BUNK’d, as well as Netflix’s NAACP Image Award winning comedy, Family Reunion.

Morenike was kind enough to share about her journey to directing episodic, her experience in the 2020 Industry Support Program, and thoughts on how the industry can step up to address the systemic inequalities facing Black women directors.

AWD: Congratulations on all of your recent success! The past few years have seen your rise in the multi-cam episodic space. Can you speak to how you broke into that world, and share what you love about working in that space?

MJE: Breaking into the multi-cam episodic space was the result of my network, my past work and unknown opportunities colliding at the perfect time. It was not something I could have predicted and not something I was expecting at the time, even though I was striving each day to get hired to direct a TV episode.

My Network: I had made it a priority to meet new people in scripted and widen my very small circle, having come from the unscripted world as a producer. I regularly attended director and writer events held by the WGA or DGA and found it difficult to really connect with the panelists as everyone is always chasing them. I had a friend in unscripted who was great friends with Meg DeLoatch, who was going to be on a WGA Panel about showrunners of the 90s. She had created Eve and was currently working on a series for TV One called Born Again Virgin that I really wanted to score a directing opportunity on because I had directed something similar (Sexless) for Black & Sexy TV. My friend Tiesha Fiemster pre-introduced me to Meg via email so I was able to go up to her at the event, and re-introduce myself in person and kind of rise above the pack of people surrounding her. She said we should make plans to have coffee!! We had an excellent talk that day and she and I remained in touch sporadically. I’d update her on my work, send reels, congratulate her on her achievements. She was from Maryland like me, had graduated from American University (I got my Master’s in film there) and was a Delta as I am, so we had a lot in common and our interaction was authentic.

My Past Work: I was steadily working to build a portfolio of work that I could have to demonstrate my passion and talent as a director. I had already done a short over 15 years ago, and as a mom, and a freelance producer, could not financially go down that road again. Instead I turned to web series. I would direct them in my free time. First, one created by a friend Peppur Chambers, that we EP’d together, which won 7 awards at LA Webfest. Then I got hired to direct Season 1 of Sexless for Black & Sexy TV EP’d by Numa Perrier, and also ended up directing episodes of the spin-off Chef Julian. Each opportunity led to another. I secured the opportunity to direct God Complx, Google’s first funded digital series, that was EP’d by Claire Brown.

Two years later I get an email from Meg DeLoatch. She was letting me know she had a new Netflix series. She’d been following my work (as mentioned above) and one of her trusted colleagues Claire Brown (I had no idea at the time!) co-signed for me on how great I was. Her email said she was looking for directors and did I know any—wink wink! I was ready— sent my reel of work, sent my resume, and she had me meet with her Line Producer and one of her lead directors.

I had never done multi-cam before, but again, took this as an opportunity. I shadowed, got to know the cast & crew and they offered me an episode in March 2019 for Family Reunion. This got me into the DGA and launched my TV directing career!

You have mentioned that you are one of only six African American women currently directing in multi-cam. While this statistic highlights your success, it also shines a light on major flaws within the entertainment industry. How can the industry do better to increase representation, especially of Black women?

The industry, specifically showrunners and networks, need to be very intentional about increasing representation of Black woman directors. Meg DeLoatch and Netflix were determined to provide opportunities on her show for up and coming directors while also hiring veterans. Ava DuVernay is doing the same on her series—intentionally giving women directors the opportunity to direct DGA projects. The issue is not that there haven’t been women in the past who could do it, but that they were overlooked for directing slots when the opportunities arose or only got one shot and were never given another. Meg intentionally re-hired the new directors she’d hired first season for Season 2 because as I’ve come to see—as hard as it is to get your first episode, it’s even harder to get your second.

I really don’t think this statistic highlights my success, but instead highlights the fact that so many Black women who worked in multi-cam over the years did not get the opportunity to sit in the Director’s chair. I just got here in 2019 and those were the statistics since 2015—only 6 of us —and 4 of those 6 were a result of Meg creating opportunities.

To be clear, multi-cam is very insulated—it’s the same group of people moving from one show to the next. They hire from within. PAs, AD, Script supervisors, stunt coordinators, camera operators, Associate Directors, Dialogue coaches have all had opportunities to direct episodes and continue to. So think about all the prominent Black sitcoms of the 90s and beyond. When that world died out, few were hired on “mainstream” network shows and their opportunities to rise, even though they knew the multi-cam format, also died. Many sitcom network stars both Black and white have never worked with Black directors, directors of color, and/or women. It’s sad and infuriating and we still need to do so much more in the multi-cam space to turn that around. The numbers are deplorable and embarrassing.

In 2020, you participated in AWD’s Industry Support program, which culminated in a virtual showcase at the end of the year where you screened a fantastic clip from Family Reunion, and shared your love of learning the actors’ choreography. Can you share some highlights of the IS program and any insights you walked away with?

Our AWD IS experience was unique—as was all of 2020—because we only met once in person— at the end of 2019. Little did we know Covid would strike. But the leadership quickly pivoted and got us access to some amazing showrunners virtually. We had really intimate conversations with these creatives that helped shape our understanding of the industry. We were able to continue to stay in touch with these showrunners, having met in an intimate space, and build relationships that will surely come to fruition in years to come.

I think the other wonderful thing was that the 8 of us really bonded as women filmmakers and are helping one another strategize and navigate our careers. We all worked together to create opportunities for each other.

My biggest takeaway is that the level of talent that these women have—we should ALL already be hired to direct episodes or films. We are phenomenal. Period. Anyone looking to find a diverse group of talented women directors need look no further than the women of the Alliance of Women Directors Industry Support program. AWD did a great job of selecting some of the most talented and creative women in the business. Networks, show runners and producers just need to commit to hiring us and they will certainly reap the rewards of that decision!

Many of AWD’s emerging members are working towards breaking into the episodic space. Do you have any advice for these directors?

Yes—as I mentioned it’s a combination of your network, your reputation (can you get the job done, will someone highly recommend you?) and your body of work. No one knows how these factors will come together to get you a directing position. In the meantime, I’d say keep learning specifically about the world of directing episodic. There’s so much free information out there on how to prep, block, use newest tools etc, including through my own @mojoacademy. Whichever format you’re interested in—single cam, multi-cam or both—Practice. The prep is half the battle. Grab a script online and proceed as if you are directing it—exercise those directing muscles. While we’re still in Covid production, lean on your network of trusted colleagues to see if there’s any opportunities to virtually shadow. This is really difficult, but shoot your shot! And if the answer is no, let it go and keep moving forward. Identify 5-10 shows or types of shows that you’d like to direct so that you are clear and top of mind when you meet someone who may be in a position to hire you in the future.

Finally, do not be discouraged and do not give up. I know this is hard. There were a few times I questioned if it was worth it, if it would ever happen. It will. Keep going. Keep doing the work. Keep being an awesome creative. Your voice and your gift is needed.

Lastly, can you share with us what you have coming up next?

I also plan to focus back on writing and developing some of my original projects steeped in my passion to tell the stories of modern day Black women struggles and triumphs.