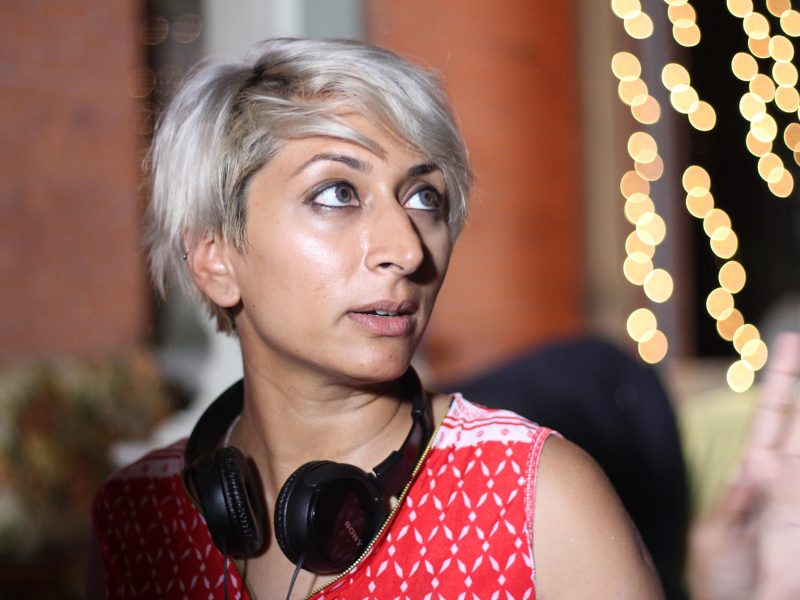 AWD Member Iram Parveen Bilal is a filmmaker to watch! Raised in Nigeria and Pakistan, she tells thought provoking stories that are socially impactful and envision an inclusive world. Her second feature, I’ll Meet You There, a family drama about a Muslim cop and his teenage ballerina daughter, was released to widespread VOD distribution in February by Level Forward. The film has garnered critical acclaim and Iram has been profiled by the New York Times and NPR. She spoke with AWD about how she turned disappointment into success, her advice for emerging directors, and her experience in the 2020 Industry Support Program.

AWD: Congratulations on the release of your feature film, I’ll Meet You There. The film was originally slated to debut at SXSW in 2020 before the event was cancelled due to COVID. How did you navigate the disappointment of not being able to enjoy the success you earned at such a prestigious festival? How did you pivot your strategy for the film and land a distribution deal?

IPB: Time, a good support system and just learning to ground myself to understand that whatever was happening was not just happening to me and that we were in a crisis as a globe. It is so easy to quickly start wallowing in self-pity that one has to try and snap out and see the bigger picture. And then, organic, genuine, non-agenda interest led to solid relationship building, which led to our impact distribution with Level Forward.

I also had to quickly curtail our festival circuit because virtual geo blocking and limited audience numbers weren’t easy to get with some festivals and we had to be protective for access to the film to maintain value for sales. Finally, we had to really strategize on how to build buzz and recreate a SXSW moment so we crafted an impact distribution with Level Forward to go ahead of our VOD release. But the strength of all of this came from having faith in the film we had and from my earlier work of self distributing my first feature, which guaranteed my direct pipeline to my audience. I knew the film had a dedicated audience. It was about finding the right partner who would mine that, with the risk of ultimately having to do it ourselves.

In 2020, you were a member of AWD’s Industry Support Program, which culminated in a virtual showcase for industry guests. During the showcase, you shared your reel, highlighting your impressive body of work, and talked about your unconventional journey into filmmaking by way of science. Can you share with us some of the highlights of the IS Program, and any insights you gained?

We met with showrunners, executives and established directors to learn of the opportunities and challenges in TV directing. The showcase was the culmination of the program and truly an idea that developed in the cohort. One of the biggest highlights of the Industry Support Program was the connection with other accomplished directors and finding champions from within the community of other women directors at a similar level.

Creativity in the best of times can be a challenge, and this past year has been especially tough for those in the entertainment industry. Can you share some ways that you re-fill your creativity cup? What inspires you and keeps you moving forward in your craft?

Meditation. Spending quality time with friends and family. I make it a point to work hard but then play hard, and try to do nature outings as regularly as I can. Self-care is supreme, whether that’s dipping my feet in a hot water tub or reading poetry or Bridgerton(!). I think widespread critical and audience validation of the film really has inspired me to move forward in my craft.

Do you have any advice for the emerging directors in our ranks?

Keep directing, whether it is a short, or a scene or a few scenes. Work begets work and movement begets movement. You have to keep putting out work and as directors, even though the limitation of resources is real and hard felt especially by women and women of color, the hard reality is that the system still expects new work. Just reframe that new work doesn’t mean a new short or a feature, it could also mean a brave scene. Also, start building your brand, your voice, a pipeline to your audience as well as a base for potential investors now, bit by bit. Audience is king and really your biggest strength.

Lastly, can you share with us what you have coming up next?

Before we talk of my next work, I’d request whoever is reading this to take a minute and rent our film on iTunes right now! We must stay with distributing our content after creating it before jumping on to our next projects. You can head over to here and do a sister a favor. And in terms of next projects, my next feature, ONE OF A KIND was 1 of 15 projects invited to Cinéfondation’s L’Atelier at Cannes 2019. We are hoping to shoot that in Pakistan early next year insha’Allah. I also have two TV series that I created and helped create that are in their due process of development. Finally, I really am hoping to join the TV directing ranks this year.