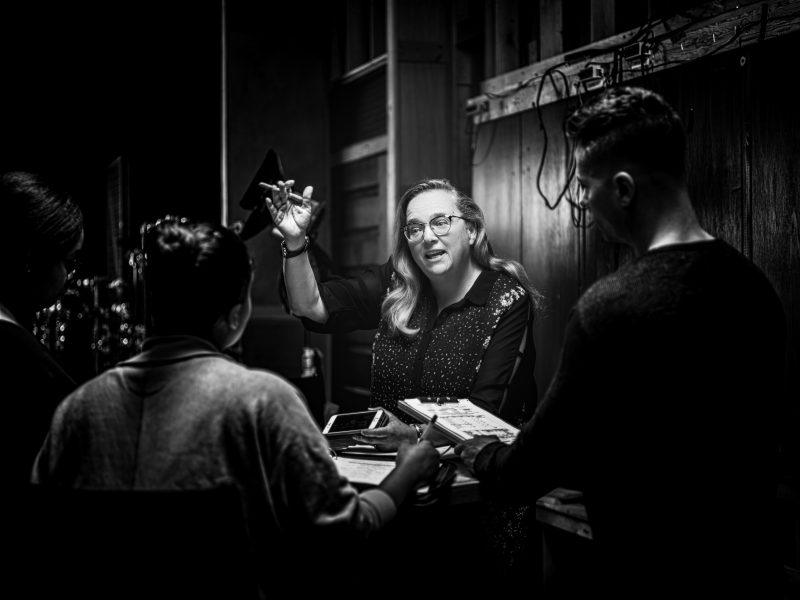 This month we’re spotlighting director Heather Hawthorne Doyle as our AWD Member on the Rise! Before moving to the narrative world, Heather worked as a director, producer, and show creator in lifestyle and factual entertainment, producing more than 200 hours of award-winning programming, and developed six series for North American broadcasters. After finding her passion for scripted tv and film, she directed episodes of “Endlings” (Hulu/CBC), “Odd Squad” (PBS/TVO) and “Dino Dana” (Amazon/TVO). She is currently on a roll with directing TV movies, with her eight production on the horizon. Heather was kind enough to tell us about her journey and share advice for emerging directors and those moving into the narrative space.

AWD: Firstly, congratulations on all the work you’ve been directing recently! At this point, you’ve got a fair number of TV movies under your belt. That’s a fantastic accomplishment, and we’d love to learn more about your experience working in that space.

HHD: Thanks a ton! It’s been a wild two years since I got my first TV movie and next month I’ll start to shoot my eighth! And I’ve had the chance to work on two great TV series in that time period too: “Odd Squad” for PBS/TVO and “Endlings” for Hulu/CBC.

There are a lot of television movies that shoot in Vancouver Canada where I’m based. Although we say they shoot in Vancouver, they are usually shot in nearby cities; Langley, Maple Ridge, Mission and on the island in Victoria, or in the interior Kelowna, Kamloops or Summerland. We’re a very busy province for television movies! These are movies for Hallmark, Lifetime, UPTV or international sales, and they all air in Canada too, usually on either W Network or City TV.

I love this space. You have a lot of freedom when you’re directing a tv movie, unlike episodic tv where the showrunner/writer is the main storyteller. With TV movies the director can be the main storyteller and that’s really exciting. Shooting time is tight – anywhere from 12 to 15 days usually – and sometimes the crew is emerging, but those have also been some of the best crews I’ve worked with.

Your work in scripted series and MOWs follows up on your impressive career in the unscripted world where you worked as a director, EP, and creator. Can you talk a bit about that transition, and what lessons you bring with you from the factual/lifestyle world?

When I started to tell people that I was going to transition to narrative storytelling, going to scripted from unscripted, I was met with a fair amount of disbelief. Apparently it’s a tough transition, but my whole career I’ve always figured if you put in the work you can accomplish anything. I was super fortunate that the last unscripted series I produced, “Love It or List It Vancouver” for HGTV, had a super supportive executive producer who would let me take time away to learn scripted. I did a shadowing gig for 4 weeks in Vancouver on a half hour live action VFX series for Disney, “Mech X4,” and that led to applying for the 2x More Program with Women In View, who aimed to place twice as many women directors in episodic tv. They partnered with a great production company in Toronto, Sinking Ship Entertainment, who were incredibly supportive. They agreed to take 3 female directors a year who would watch an experienced director helm an episode of “Dino Dana” and then give the shadow director their own episode to direct, with the experienced director overseeing. I can’t speak highly enough of that experience. Shadowing that leads to a job is the absolute best way of shadowing, confirming that a director can do the work.

Sinking Ship has continued being great supporters of my work, bringing me back to direct multiple times on “Dino Dana,” as well as “Odd Squad” and “Endlings.” Finally, I did my last shadowing in Toronto for almost 6 weeks on a hit tv series, “Private Eyes”. The best part wasn’t what I learned as much as realizing that I did have the skills to do this work. Shortly after I got back from “Private Eyes,” I had my first interview for a TV Movie and I booked that job, partially because of the strength of my episodic kids tv experience.

There are lots of transferable skills from unscripted to scripted. Storytelling is important in both. And if you can direct real people into being natural and comfortable on camera, you’ll always be able to work with actors who actually want to be on camera! And I think it’s my skill in unscripted which led to me being so good with kids, letting them be natural will allow them to be their best. But there are some things – like how long it takes to shoot a scene in scripted – that are so very different than unscripted! Everything can be learned.

This year, you were one of twelve AWD Members selected for Jennifer Warren’s Directing the Actor Lab. Can you speak to your experience in the lab so far and what prompted you to apply? We’d love to know more about your overall experience with AWD as one of our Canadian members!

It was an honour to be chosen. I wanted to do this not only to be more involved with AWD, which is an organization I have a ton of respect for, but also to get to know fellow directors from across North America. So far I’ve really enjoyed not just the class but the study sessions in between classes that the directors are doing on their own. It’s a chance to be really honest with fellow directors and I’m loving that fellowship.

I applied for this workshop because I wanted the chance to just immerse myself in the acting side of directing. I’ve always taken improv classes and love to perform but it’s only been recently that I’ve started taking scene study classes too, so that I can really understand what the actor is hearing when I communicate with them as a director. This workshop is part of continuing to hone my skills in that area.

I feel that AWD has been super welcoming to Canadian directors and I really appreciate that. As a Canadian I’ve always watched American TV (and some fantastic Canadian TV too: “Schitt’s Creek”, “Kim’s Convenience”, “Baroness Von Sketch Show”, “Transplant”, “Coroner” and in the past “Rookie Blue”, “Flashpoint” and of course “Degrassi!”) but we still watch so many American series that we consider it all North American – there’s little difference between us (except health care, tee hee).

For many emerging directors in the industry, landing their first TV gig – whether episodic or MOW – can seem like a daunting challenge. Is there any advice you would give an up-and-coming director on how to best position themselves for those gigs?

It’s tough to get your first gig, it’s tough to get your second gig, but it does get easier! Just consider that most people, producers and broadcasters alike, are risk adverse. Why does it seem like they always work with the same people? Because they know they can trust them. So you’re trying to convince them to trust you too. There are a ton of different ways to get that first chance. It could be because they met you working another position and they remembered how good you were, or it could be they saw that you got into a great film festival, or a friend of theirs met you and spoke highly of you. It really is just important to get your name and your work out there and do as much directing work as you can, paid or unpaid. I took out a line of credit when I first made the transition to scripted. A great short film can get you a chance. Two great short films or a short and a music video might get you the chance sooner! And it’s a small industry even though it seems really big, so be a good person to everyone you meet. And take as many workshops as you can through great organizations like AWD. You might just hear something that will give you a leg up in the next interview. Believe in yourself. Invest in yourself. Don’t give up.

Can you share with us what you have coming up next?

I just finished a really great movie called “Sit, Stay, Love,” starring Andrea Brooks and Marcus Rosner and introducing Nova as “Sam”, whom we nicknamed Love Puppy! Yep, a romantic comedy that has a border collie mix as the co-star. We had so much fun making this movie and I can’t wait for people to see it. And next month I’ll shoot another movie, this one for Hallmark, “Love in the Afternoon” starring Jen Lilley and Ryan Paevey. I’m super excited to work with both of them, they’re truly at the top of their field. It’ll air later this summer.

Thank you Heather for sharing your story with us! Keep up with Heather’s success on Instagram and Twitter.