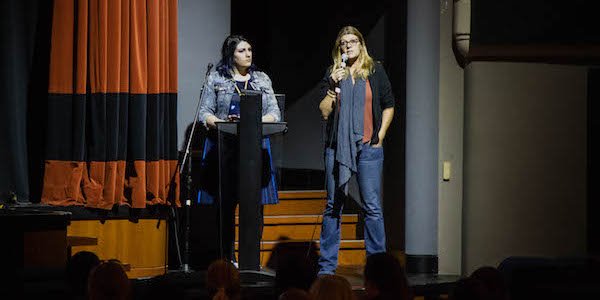 After a successful inaugural year, Toronto True Crime Film Festival is returning in June 2019  with complicated cases and compelling cinema. AWD spoke to Festival Director Lisa Gallagher about the origin of the fest and the selection process of bringing true crime films to the big screen.

In 2019, the sophomore edition of Toronto True Crime Film Festival is already seeing growth: you are moving into a new screening venue, Revue Cinema, the oldest operating movie theater in Toronto. How did it all start and are there any other changes to the festival this year?

I was on a train headed to a film festival, expressing my excitement for their true crime selections (while also complaining about wanting more), when I said, “Somebody should start a festival that’s just true crime movies!” Pretty much right after that I realized I’d been working for film festivals for over four years and curating a monthly film series for almost three and already had all the skills needed to create a film festival. And, more essentially, I had friends who believed in me and would join my team to make it happen.

No serious changes have been made beyond the new venue. We’re holding the festival for the same length of time (two days) and planning to have the same number of film screenings (five) and the same number of speaking events (three). Of course, the films and guests will be different from last year!

How does the festival strike the balance between the documentary and narrative fields when programming the films?

When we were selecting films for our first year, we looked at what films were at the top of our list and then took a step back to see how they would all work together. All of the films we had chosen were so different and unique that we found ourselves with a great mix films, in both style and subject matter.

How do you decide which short is paired with which feature? What are your plans, if any, on changing the number of films you showcase?

For our second year, we have no plans to change the number of films showcased. I’m always open to change though, so I really can’t say if things will stay the same until we lock our line-up.

The first edition of TTCFF screened multiple films directed by women: 80% of shorts, and 60% of features. Was this a conscious effort? And how is 2019 shaping up?

It was a conscious effort to have at least 50% of our programming be directed by women, for sure. We haven’t made any official selections for this year’s festival yet, but we will certainly be making the same effort for gender parity in this year’s program.

What has attracted you about Alliance of Women Directors to pursue a partnership with the organization? What do you wish to achieve with this collaboration?

Skye Borgman, who directed the opening night film at our very first festival, Abducted In Plain Sight, was the one that put me in touch with AWD. She had a hunch that we’d be a good fit for each other and, obviously, she was right! Prior to TTCFF, I spent three years programming and managing a monthly film screening as a part of The MUFF Society, a feminist community that aims to celebrate the achievements of women—both on and off screen—in film and television. Women can do the most extraordinary things when they have the support of those around them, and any time I can help make life even a tiny bit easier for another woman, I want to do that. I’d rather a woman be able to put their money into the projects they are creating than have to spend it on submission fees.

Is there anything else you would like AWD Members to know about Toronto True Crime Film Festival?