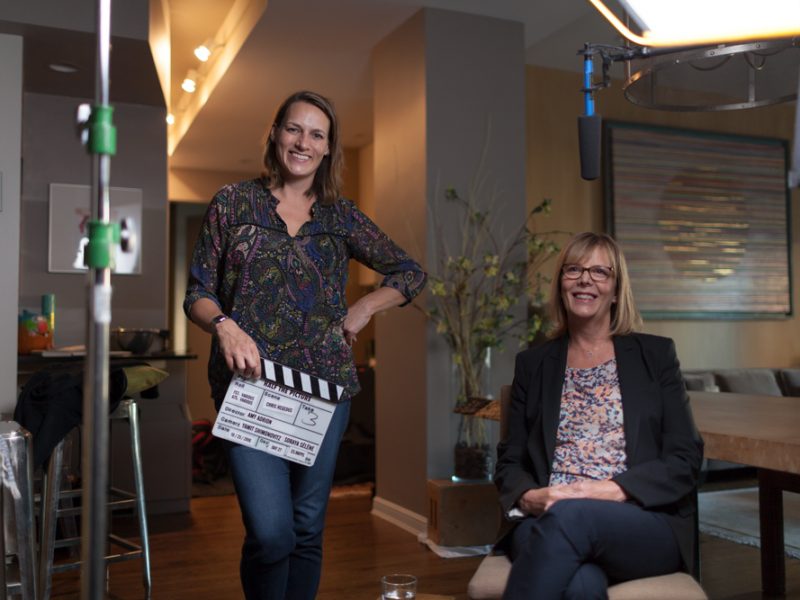 by AWD member Karen Bacellar
All Photos by Ashly Covington

Around that time, there were tons of articles and reports about how nearly impossible it was for women directors. But things were also beginning to change thanks to a number of women speaking out about industry discrimination and the American Civil Liberties Union (A.C.L.U.) pushing state agencies and the Equal Employment Opportunity Commission (EEOC) to investigate Hollywood’s hiring practices.

Adrion wanted to speak to these women and see how they were breaking through the glass ceiling—thus, her documentary Half the Picture was born. 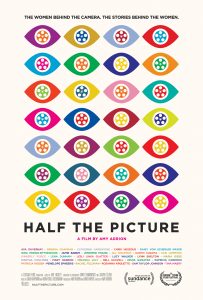 In Half the Picture, Adrion uses the EEOC investigation as a platform to interview several women directors, including Ava DuVernay, Mary Harron, and Catherine Hardwicke, about their experiences in the industry (everything from balancing career and family to dealing with rude comments on set) and what inspires them to keep going. The film, which took three years to complete, made a splash at Sundance 2018 on the heels of #MeToo.

“I think our film came along at just the right moment,” says Adrion. “After a long period where women did not speak on the record about this kind of stuff, because of the A.C.L.U. investigation and because of really a handful of A-list directors who had been speaking about the discrimination they faced—and Catherine Hardwicke and Ava DuVernay are among those — other women started to speak publicly.”

She continues, “After women talking amongst themselves about these issues for years, there were finally some powerful organizations saying, ‘Yes, this is discrimination. This isn’t right.’ And that was a key change to have an organization like that say they’re going to take the case on.”

Now a year and half after Half the Picture first screened, it has played at festivals worldwide from London to Dubai, and most recently New Zealand. It has also become part of the larger ongoing conversation about gender discrimination in the film/TV industry that continues to spark change today.

Adrion has seen that change “anecdotally, with friends who have been trying to break into TV.” She says, “TV is huge. It saves you. There was and continues to be such pressure and demand that production companies start hiring women directors and in TV, when you’re hiring 13 directors or more in a season, there’s more room for women.”

Film is a tougher nut to crack. The University of Southern California study from 2015 cited in articles about the A.C.L.U. investigation found that only 1.9% of the top 100 grossing studio films were directed by women. Four years later, that number has risen to 4%. Progress, to be sure, but a long way from equal.

Still, Adrion finds hope in “the high-profile examples of women getting incredible opportunities that they well deserve” and wants to see more of that.

“More women are being taken seriously and there is an awareness in the industry that if you have lists and there are no women directors on your lists, then that’s a problem,” says Adrion. “That wasn’t the case five or even three years ago. But the hiring numbers need to change.”

A way to ultimately do so, now that the conversations are open, is to “keep being loud about it.”

“When Venice Film Festival has two films out of 21 in competition that are directed by women, then that’s a problem, and we need to use the powerful tool of social media to shout out things that continue to be discriminatory,” says Adrion.

“Women have been doing an incredible job in supporting one another, hiring one another and giving recommendations to one another. It’s still really hard to break into what remains an ‘old boys network’ in Hollywood. That’s still predominantly who hires, who makes decisions, and who finances films, which isn’t to say we shouldn’t all bang on those doors, but I think it’s been more fruitful when women have given opportunities to one another and that it continues to happen.”

Persistence is key. So is resilience. Those are two of the main things Adrion learned from all the women directors she interviewed.

“I love every single one of the directors who we interviewed and it was such an honor to basically sit and have a master class with each of these incredible women,” she says. “A few of them mentioned that you have to have a bit of delusion to move forward in this business and that was important to be reminded of. If you look at the statistics, you’ll just pack it up and not bother. You have to be able to make stuff and get those rejections.”