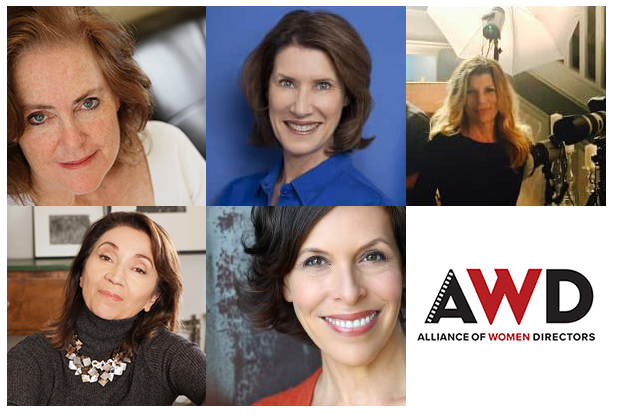 On a sunny April afternoon, I sat down with five AWD members — Luann Barry, Marty Elcan, Liz Hinlein, Matia Karrell, and Paige Morrow Kimball – who recently won an International CINDY Award for their collaboration on “Making LA Happen.” Their inspiring film, highlighting the people who make LA what it is — a busy machine continuously churning, moving, aspiring, growing — is a testament not only to female LA leaders, but also to the women seated around me.

Kimball, right away, acknowledges Mary Lou Belli (Co-Chair of the DGA’s Women Steering Committee and honorary AWD member) for her enthusiasm about the program and her ability to pair each director with a leader with similar professional or personal traits. Hinlein and Elcan echo the sentiment, finding that the personal connection to their subjects deepened their experience.

But just like any other production, not everything went as planned: Hinlein’s idea of concurrent interviews with the LA leaders was prevented due to conflicting availability; limited access to each leader precluded the in-depth character development the directors had hoped for; and a tight time frame and finite resources led to creative, but stressful, solutions during post-production. Furthermore, the leader whom Barry was following had to exit the project due to family emergency, leading to Barry joining Karrell’s PSA as additional camera.

Karrell and Barry express appreciation for the incredible support they received from DGA’s WSC Co-Chair A. Laura James (also an AWD member), and the interstitial work done by DGA member Martha Cotton, who unified all the individual PSAs into one final program.

What is palpable during the conversation is the theme and feeling of support and collaboration each director experienced within the group, and from the DGA’s Women’s Steering Committee and LA Cityview teams.

I asked each director to talk about the work they’ve done since “Making LA Happen” and to share some advice for other aspiring directors:

“Do the research and always bring something new to the table while making each project feel real and authentic.”

Luann Barry is developing web series projects to fit the current model of short low-budget distribution that successfully provides employment for and develops new generations of women filmmakers. She is also set to direct a PSA for the current collaboration between the DGA’s Women’s Steering Committee and the City of Los Angeles focusing on the LA Unified School District and its new diversity driven programs.

“Write material one is passionate about, and develop mentorship and connections to sustain a long-term career.”

Marty Elcan, stepping away from a lustrous career as a 1st Assistant Director, is set to direct a short in Virginia over the summer. She is also in consideration to direct two features, one of which is set in New York, and currently serves on the Board of Alliance of Women Directors

“Train one’s voice and vision and spread the connections net further than the current job.”

Liz Hinlein, now repped by Durable Goods for all US commercial work, is developing a limited series about a 30-year old autistic man, “Getting Tommy Laid”, and working on the short documentary “I Am the DJ” set in a strip club, while shadowing on TV sets and teaching directing at USC. She is also a participant in the DGA’s Directors Development Initiative (DDI) for episodic television.

“Create projects that excite and satisfy to preserve and nourish one’s passion, while always finding new ways to ask questions and engage people.”

Matia Karrell is developing her limited series “Fly Girls” in the tradition of “Band of Brothers,” casting her indie feature “The Boy on the Bus,” finalizing the adaptation “Zoe La Nuit,” a female-centric thriller sets in 19th century Paris, while teaching directing at the Art Center College of Design

Paige Morrow Kimball, who recently secured representation through Abrams Artists Agency, is shadowing on TV episodes for the CBS Directing Initiative and participating in the DGA’s Directors Development Initiative (DDI). She is concurrently developing her coming-of-age original feature “Late Bloomer” with plans to direct in summer 2019 in New York, and releasing an educational middle-school program on homelessness that stemmed from her award-winning short “Play Date.”